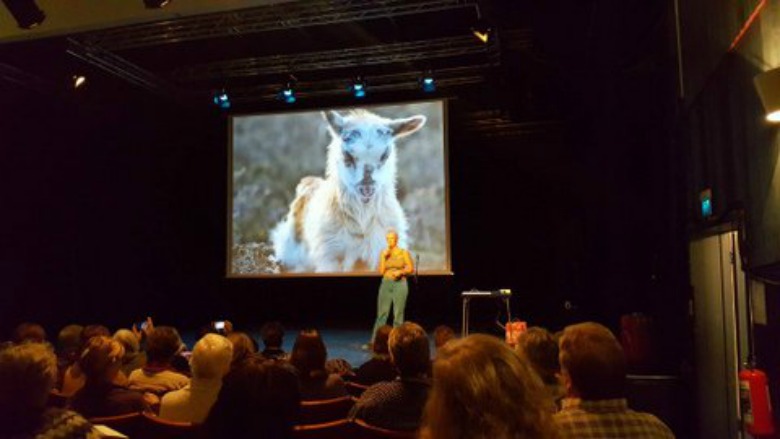 The 6th North Atlantic Native Sheep and Wool Conference was held this September in the beautiful Lofoten Islands, Norway. Karin Flatoy Svarstad, an internationally renowned felter from Norway who is a member of the IFA, established and coordinates the conferences. The countries of the North Atlantic who are the focus of the events are Norway, Shetland, Orkney, Faroe Islands, Iceland, Outer Hebrides, Greenland and the Isle of Man and their heritage regarding sheep and wool after the Viking era was celebrated.

There is always a series of lectures at the conferences given by renowned speakers in their field with a diverse mixture of subjects including native sheep characteristics and breeding, the importance of the landscape associated with them, heritage and the possibilities of new uses of the wool to increase the value of the product.

A trip was taken to see the Old Norse sheep belonging to Ragnhild Lie who was the local host of the Lofoten Conference. There was a guided tour of the Lofotr Viking Museum including a walk among the native villsau sheep followed by a wonderful lamb broth in the Viking longhouse. The following day some intrepid delegates went for a sail on a Viking ship which turned out to be a very memorable experience.

Workshops and visits to craft outlets are always included in the programme and are eagerly anticipated. Some of the workshops were; how to make lamb rolls and blood pancakes; the coastal heathlands and preparing for spinning and felting.

An eventful final day was spent at the Foodfestival in Leknes where some delegates also had stalls to sell their sheep based products to the general public. It was a wonderful opportunity for them to discuss their products and to impart knowledge about these native breeds of sheep to a wider audience.

The conference next year is to be held on the Isle of Man, the home of the Loaghtan breed of sheep. We are already well on our way with the organisation for the event which is generating considerable interest. We advise prompt registration.