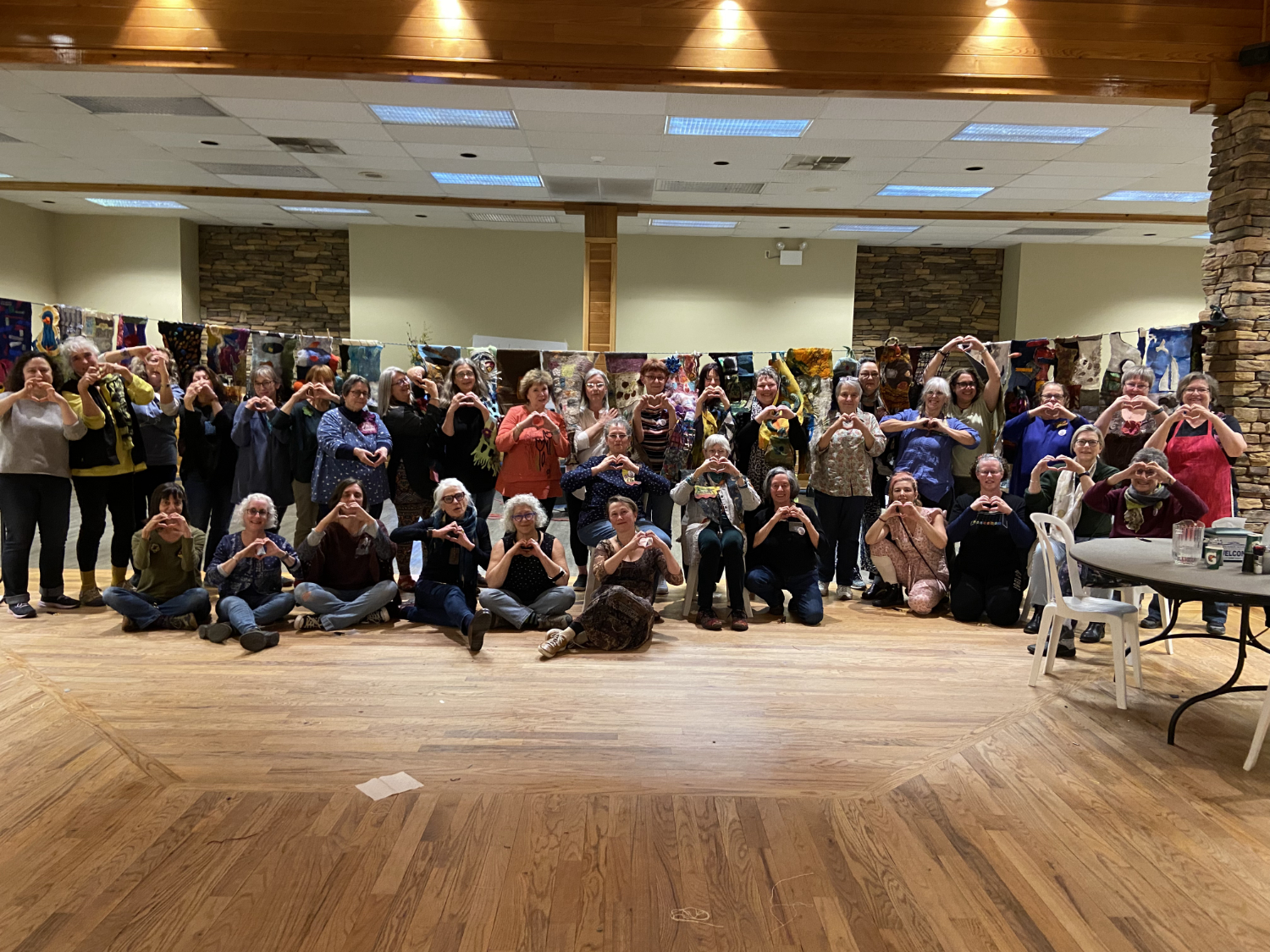 Tucked away in the foothills of the Pocono Mountains in northeastern Pennsylvania, 35 large tables were set up in a large space at a retreat and conference center ready for a long-awaited event to begin. It was April 1st……a day which is traditionally celebrated with gags and foolery, but here there was a different kind of foolery beginning. Serious foolery was about to occur! Calendars had been marked for months and each participant arrived with great anticipation for such an event. After months of zooming, the Northeast Feltmakers Guild was once again meeting in person!

Now April, in the northeast US, has very unpredictable weather…and so, of course it hailed, rained sideways, and stormed throughout the day, but each time someone arrived, the weather miraculously died down to allow everyone to unpack without much of an issue. Cars were loaded full of large plastic bins overflowing with soft colorful roving, prefelts, yarns, silks, etc. They brought their favorite tools for finishing, bubble wrap, pool noodles, pins, patterns, wire brushes, notebooks, snacks and plenty of towels to absorb the water (we wanted to be invited back), along with other miscellaneous items.

Thirty-five women traveling from as far away as Maine and Virginia, and even one participant arriving from Florida, converged for the long-awaited felting retreat. They came to recharge their creativity after a long time of seclusion. Solo time in studios had worn thin, and living far away from other like minds exaggerated the feeling of isolation. They came to learn, exchange ideas, share their love of the craft and rejoice in… once again, being able to reconnect in person. Each person unpacked their supplies and the expansive space quickly echoed with an abundance of welcoming hugs and chatter.

This retreat was time to reconnect with others, recharge creativity that could have slumped in the long past months, but also was viewed as a concentration of time away from all other distractions in order to get something done. There were no rules as to how to use your time. It was your choice to watch the demonstrations or not. The agenda included participants who offered to demonstrate their take on a technique. A supply list for the presentations were sent to everyone before arrival to help with deciding what to pack. Short demonstrations started the morning off to share with those who were interested, with plenty of personal time following to use as one wished. More demonstrations were presented after lunch. And as a side note….the food was very well received giving this retreat another gold star! Techniques shared included needle felting, rug hooking, embroidery, along with a variety of felting techniques, tricks and tips. The kindness, caring, generosity, and supporting one another was something to experience!

The participating felters were of varying abilities, yet everyone was appreciated and felt warmly accepted by the entire group. All were interested in learning and willingly shared their knowledge with one another and that continued well into each evening. I think it is safe to say, when people left at the end of the retreat, they left with their creative batteries recharged with overflowing ideas and blossoming friendships!
Positive feedback gave the thumbs-up to do it again…and again. It was quite an exceptional time!